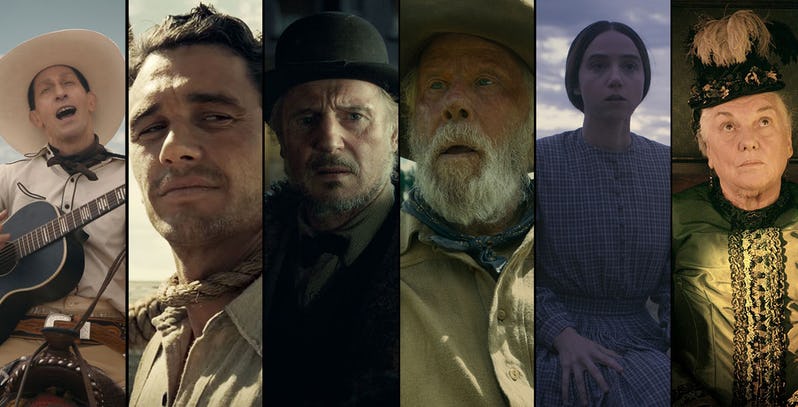 When the video game “Red Dead Redemption 2” came out, it popularized the cowboy lifestyle and western life. “The Ballad of Buster Scruggs” is a modern take on the game’s style. This Netflix original was nominated for two Academy awards and was directed by Ethan and Joel Coen, who also directed “No Country For Old Men.” “The Ballad of Buster Scruggs” is a must-watch because it incorporates six great stories into one movie, and the reader gets both a comedy and a serious story all in the same sitting.

The first short story, like the movie itself, is called “The Ballad of Buster Scruggs,” and it’s about a gunslinger who is wanted and on the run but also has a guitar and a sweet voice. This story is one of the best in this anthology, with its mixture of catchy songs and comedic timing. It starts with the song “Cool Water” sung by actor Tim Blake Nelson, who also plays the guitar. Starting with the guitar makes the movie stand out from other westerns because not many can make unique music that has a modern feel to a western tone. It’s one of three songs from this story alone and they are all worth listening to on their own.

All three songs play really well into the story: “Cool Water” introduces Buster Scruggs’s character; “Surly Joe” shows his true nature and skill; and “When a Cowboy Trades His Spurs For Wings” is a somber, slow song that wraps the story up very well, complementing the surprise ending. The ending sets a serious tone for the rest of the stories by preparing the viewer for unexpected twists.

The next story is “Pan-Shot.” The story starts when a bank robbery goes wrong and the robber gets knocked out. The events that play out after he wakes up make it look like it will be a typical redemption story where the bandit changes his ways, but then out of nowhere it adds a twist with dark humor on the side. In the story James Franco plays the bank robber, and his presence is always a plus because of his comedic timing and delivery of lines. Overall, this story is still one of my favorites in “The Ballad of Buster Scruggs.”

“Mr. Pocket” is a story about a gold miner who finds a stream and slowly but surely gets closer to “Mr. Pocket,” or the pocket of gold he is looking for. It has a great metaphor for the human effect on nature, causing animals to move away and disrupt life, and how nature moves on from the interruption by humans. This is shown when the miner first arrives and the animals and fish disperse, but then when he leaves they all come back like nothing happens. This is one of the better stories in the film.

The three stories I disliked the most were, “Girl Who Got Rattled,” “Meal Ticket,” and “The Mortal Remains.” I disliked them because the plot was slow moving and there was a lack of a comedic break. These stories were the worst of the film, but that is because of their focus on emotion and developing the characters in the story.

“The Ballad of Buster Scruggs” is a great movie, and although some of the short stories are hit or miss, the good ones outweigh the bad ones. This makes the movie worth a watch because it has well-rounded stories that aren’t too long, and it has a mix of comedic and serious tones that ensure you will enjoy the stories.