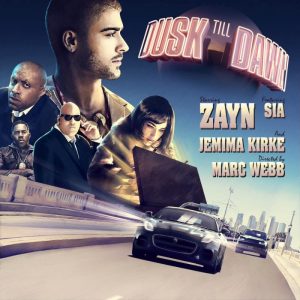 Former One Direction member Zayn Malik has spent the past year redefining his musical style and persona through releasing more indie-styled music reflective of his own experiences and true personality. Zayn is back with a new single, “Dusk Till Dawn,” featuring Sia, released on September 7. Not only did he release an awe-inspiring collaboration, but there is also a well-produced music video to go along with it.

Ever since Zayn has released his debut solo album, “Mind of Mine,” fans have been anxious to listen to more of what his new music style has to offer. After his debut album release in 2016, Zayn has released a few collaborative singles such as “I Don’t Wanna Live Forever” with Taylor Swift and “Still Got Time” featuring PartyNextDoor.

“Dusk Till Dawn” is another heart-throbbing ballad that starts off with a calming piano verse as Malik’s vocals build up to the more dramatic chorus when Sia joins in. The song is full of emotion and creates a longing feeling as the slow beginning verse bursts into the more fast-paced chorus.

Although Sia has a very powerful voice in comparison to Zayn’s falsetto range, they both do a phenomenal job of matching their vocal ranges to create a balanced harmony that perfectly intertwines with the comforting mood of the song.

The five-minute music video aids to the overall strong-willed and dramatic outlook of the song. Directed by Marc Webb, who also directed “500 Days of Summer” and “The Amazing Spider-Man,” the music video shows a suspenseful cop chase involving Malik and actress Jemima Kirke. Zayn has adapted a mysterious persona, clad in a grey suit, black shades and holding a strange, black briefcase. He’s seen to be following an unknown girl (Kirke’s character) along a vibrant Chinatown street, as he soon spots a group of cops following him.

The concept of the cops chasing him as he winds through a bright and busy street helps to build up to the chorus of the song because the anticipation aids the sudden nature of the chorus. Once he is caught, there is a small exchange between him and the cops in a typical dark, sketchy building. This small dialogue in the video creates the tension and builds up the plot. This part of the music video has an especially prominent transition scene from Zayn’s character’s setting to Kirke’s character’s setting. It helps tie the plot together as it’s revealed that she is his partner.

No cop chase is complete without the main action character getting away in luxury–or an epic escape through explosives–and the “Dusk Till Dawn” video is no exception. Using these tropes adds to the action-packed theme of the video. The music video then ends with him and his partner Kirke getting away with the mysterious briefcase as they drive into the sunset.

Perhaps the main reason the music video is such a success is because of the beautiful cinematography. From the busy China Town scenery to the intense car chase scenes, Webb does a phenomenal job of making the scenes of the music video flow together, so that no one scene is left feeling unfinished. It’s often difficult to create an easy-to-follow plot in a five-minute music video, but with the help of smooth changes in scenes, it is fairly easy to grasp.

Even the song’s cover art design suggests a 90’s action film look, which the video definitely plays off of.

This first solo and music video from Zayn’s second album provides an exciting insight to what his upcoming music might include.