‘Tall Girl 2’ marks the downfall of the ‘Tall Girl’ franchise 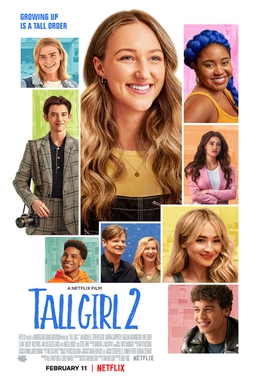 From Wikipedia under fair use

In the movie “Tall Girl,” Jodi Kreyman (Ava Michelle) bared her soul in front of the whole school during Homecoming with a speech expressing her love for herself and her tall frame. After shedding her insecurities, Jodi deals with another enemy in “Tall Girl 2”: herself. With predictable, unremarkable scenes and two-dimensional characters, “Tall Girl 2” is an unnecessary sequel to an already lackluster movie.

The movie revolves around Jodi’s new relationship with Dunkleman (Griffin Gluck), her loyal and supportive boyfriend who resents Jodi’s newfound popularity. Jodi tries out for the school play “Bye Bye Birdie” and lands the lead role, which she had dreamed of performing in since middle school. However, in doing so, she pushes the people she loves to the side while also fighting her inner naysayer and struggling with anxiety.

While the first movie in the sequel focused on Jodi’s struggle with being the ‘tall girl’, “Tall Girl 2” delves deeper into Jodi’s love life. Jodi’s new relationship with Dunkleman grows strained, and an unexpected spark grows between Jodi and the new guy, Tommy (Jan Luis Castellanos). The movie revolves around Jodi’s relationship struggles, making it seem like the director wanted to fill the empty plot with trivial details. Watching Jodi and Dunkleman mope over their failed relationship in almost every scene was very repetitive and hindered their characters’ development. “Tall Girl 2”  could have focused more on Jodi’s journey of gaining confidence and rising above her inner naysayer. Instead, drama and romance struggles dominated the movie.

The plot development was also completely random: Stig’s sister (Johanna Liauw) randomly visited from Sweden, and she served no purpose other than to help Dunkleman pretend that he’s okay after his breakup. Jodi kisses Tommy only for him to disappear at the end and Jodi to get back together with Dunkleman.

The characters are essentially cardboard. “Tall Girl 2” was so focused on trying to manage to pull a movie together that it forgot to invest any effort into creating decent characters. Jodi was self-absorbed and tried to ditch her boyfriend’s thoughtful anniversary dinner to practice her lines for the play. Though her struggles with anxiety built a hint of complexity, her character arc was one-dimensional.

Dunkleman’s only purpose in “Tall Girl 2” was to mope over Jodi, and Stig (Luke Eisner) didn’t add anything to the movie other than to randomly become the new boyfriend of Fareeda (Anjelika Washington), Jodi’s best friend.

The most developed character was probably Kimmy (Clara Wilsey), who started as the typical mean girl but eventually matured and even showed a sliver of her inner compassion when she helped Jodi in the play. Watching her finally strive to become a better person rather than regain her queen bee status was a sweet addition to the movie.

I also appreciated Jodi’s goofy and caring parents (Steve Zahn and Angela Kinsey), who were the only characters that I truly enjoyed watching, though they were sadly barely present.

Jodi’s relationship with her older sister (Sabrina Carpenter) shines in this movie, and it was refreshing to see Harper’s vulnerability surface from beneath her pageant queen exterior. Both Harper and Jodi struggle with fighting their inner pessimist, and Harper’s fear of people not taking her seriously because of her looks was a refreshing change from the rampant drama and random side plots.

“Tall Girl” was already a failure and was repeatedly dragged by viewers. Though Netflix might have turned to “Tall Girl 2” for redemption, its efforts only brought the franchise down further. Unless you are in the mood to tear something to shreds, cross “Tall Girl 2” off your list and move it straight to “AVOID AT ALL COSTS.”