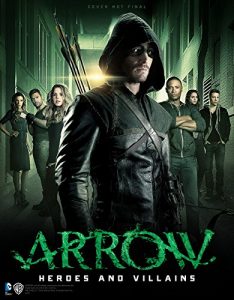 The man ran as fast as he could down the alley with the purse in his hand. Right before he rounded the corner, a bright green arrow pinned his arm to the wall. With a scream, he dropped the purse and looked up just in time to see a figure ziplining from the rooftop as the police cars pulled up next to him. The Green Arrow had struck again.

The action-packed CW show “Arrow” is in now fifth season this October, and since its first episode in 2012, the show aspired to portray the character of DC Comics Green Arrow, played by Stephen Amell, in a serious yet entertaining way.

Oliver Queen, aka the Green Arrow, was stranded on an island for five years. When he came back to his home in Star City, he found it overrun with crime, so he set out to “save his city.” Season 5’s goal so far has been to show how the Green Arrow deals with the disbandment of his team and the struggle of being without backup in the field. The Green Arrow is shown as a vigilante who plays by no rules and isn’t afraid to kill, at least at first.

The darkness of the show helps to add to the figurative demons inside of both the city  and Oliver himself. This makes the show feel extremely intense and dramatic, enticing viewers even more. The CW’s other superhero shows are a lot more light hearted than “Arrow.” Shows like “Supergirl” and “The Flash” are set primarily in the daytime, whereas “Arrow” spends a lot of time at night or in the dark. This choice adds to the seriousness and demeanor of the character and the show.

The makers of the show also want to improve their writing and cinematography to be the most appealing and realistic it can be. “Arrow” had some amazing scenes throughout the first episodes. The first time we see Oliver use his new fighting skills in the pilot episode, the cinematography was a little jumpy, but throughout the episodes it has become strong in cinematography and so far this season has not disappointed. The first fight scene in episode one “Legacy” had much better choreography with a lot more stunts than the first seasons.

Compared to other shows such as Agents of Shield, “Arrow” has some of the strongest visuals in the industry. The transitions and cuts to flashbacks are always smooth and easy to follow. The audience always knows whether you are in the past or present. In the first season, the flashback cuts came at smooth times and were preceded by a big flash on the screen to show the transition. In season five, the cuts to flashbacks have been made more free flowing and continuous with the show.

“Arrow” has contained both sexual content and violence in the past. The sex has been extremely mild in all seasons including this one. As for violence, the show has some scenes that contain death and one or two scenes of mass destruction, but I would not deem them unnecessary. The violence helps to further the storyline of Oliver and his mental struggle between morals and justice. It also helps to continue the dark, mysterious aura surrounding him and his fight against crime. While the show has improved a lot in most areas, some of the more laid back, drama scenes are not quite as well put together and still feel awkward.

You can watch “Arrow” on Wednesdays at 7 PM on CW. If you’re a fan of the superhero genre, you won’t be disappointed by its impressive action scenes and tense plot.