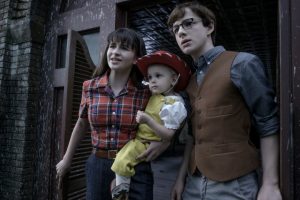 “Don’t make the same mistake Netflix has and look away before this dire tale is even filmed,” Lemony Snicket warns in the Season 2 teaser for “A Series of Unfortunate Events.” Despite this cold warning, the show does nothing but warm your heart and captures your attention.

The first season of “A Series of Unfortunate Events” was released on Jan. 13, 2017 with eight episodes. The show was rewarded with immense love and praise, and fans were already eager for the rest of the seasons to unfold The second season, released on March 30 consists of 10 episodes, covering books five through nine. The finale leaves off on an enticing cliffhanger that promises to bring back many viewers for season 3, which will cover the last four books is the series.

Season 1 covered the first four books as the Baudelaire orphans kept changing guardians in order to escape Count Olaf, their very first guardian, a man who only wants their fortune.

The show opens up right where season 1 left off, with the Baudelaire orphans being dropped off at the Prufrock Preparatory School. Season 2 faithfully reminds you of the book series and the memories of reading the books as a young adult. It’s highly entertaining to see these books come alive, and all the characters play their roles with nothing short of perfection. This can be seen through Sunny, a baby, who knows how to talk and work far too well for her age. Instead of getting caught up in how unrealistic that is, the directors do a great job using the unrealistic part to add a little comedy into the heavy show.

The episodes in season 2 are structured the same way season 1 episodes were; however, the main focus changes slightly in season 2. Season 2 follows the orphans as they try to keep their cover in order to throw off Count Olaf, and the show also introduces another mystery. As the second season progresses, the Baudelaires try to solve the mystery behind the death of their parents, and that only keeps the watchers coming back for more.

Season 2 introduces a new set of siblings that attend the Prufrock Preparatory School with the Baudelaire orphans (Malina Weissman, Louise Hynes, and Presley Smith): the Quagmire triplets, Duncan Quagmire (Dylan Kingwell), Isadora Quagmire (Avi Lake), and Quigley Quagmire (Dylan Kingwell). Both set of siblings are enticing to watch as they make you tear up through their miseries and laugh through their adventures. Count Olaf (Neil Patrick Harris) is just as amusing and wicked to watch as he was in Season 1. His bizarre disguises and dry humor do a great job of keeping the show light.

The Netflix show does an spectacular job portraying the books accurately, and despite the depressing theme, it will be hard to stop at just one episode. The series is just as addicting as the books were, thanks to the unique plot of the series. Make sure to stream this show next if you’re looking for a fresh series with just the right amount of humor and drama.Eike Schroter / Netflix

Tags: A Series of Unfortunate EventsNetflix