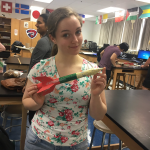 The Mongal Empire reigns supreme. Even though the Mongals are no longer in existence today, Michael Lee, ‘18, and Matthew Jun, ‘18, picked the Mongal Empire to represent their team in this year’s Physics Olympics. After three weeks of intense competition, Lee and Jun’s team won first place.

“The Physics Olympics is a three-week competition in which only AP physics students compete,” physics teacher David Torpe said. “Students partner up and pick a country to represent themselves.”

s begins,” he continued. “Every day, students compete in engineering challenges and get points on how well they placed compared to all other competitors.”

At the end of the competition, the team with the highest number of points wins the Olympics. They receive golden trophies and a large piece of candy as their prize, and the pride of winning the olympics. This year’s top five teams are the Mongals, first place; Ethiopia and USA, tying for second place; Papua New Guinea, fourth place; and Mexico, fifth place.

Some events are more difficult than others, and oftentimes students are unable to finish the event. “If a team cannot finish an event, they get no credit, which drops them to the very bottom,” Torpe said.

“One of our events was holding as many pennies as you can in a foil boat without it sinking,” Torpe said. “The goal was at least one dollar in pennies, and North Vietnam’s boat held eight cents before it sunk.”

A few of the other events in the Olympics include building a paper rocket and spinning tops, as well as a paper tower race and a balloon car race.

“The rocket was the best event because we got to spend more time designing the rocket,” said Matt Wozniak, ‘18. “It was fun to see the rockets launch and some explode on the launchpad.”

Wozniak’s team was Sweden. “My partner and I picked Sweden because it is a peaceful and beautiful country and has a pretty flag.” They placed sixth in the olympics, only a few points away from the Top Five.

Students in the Olympics are encouraged to show spirit for their country. For example, Allison Zhang, ‘18, and Sarah Yamaguchi, ‘18, baked a cake with the Icelandic flag in the middle to represent pride in their nation. Students representing Japan brought in pizzas for all the classes, which earned them a third place finish in the spirit event.

“The spirit that students show goes both ways,” physics teacher Martin Kulak said. “Some students are very positive and funny about their own nations, while some trash-talk other countries. The Physics Olympics has a little bit of everything.”

The Olympics even have a bit of superstition: the Diboujitan curse. The curse falls on any student who picks Djibouti as their country.

“Djibouti almost always places last,” Torpe said. “It’s a curse, and if they don’t place last, then the students have the worst week of their lives.”

Overall, students say they enjoyed the competition that the games brings to physics. “The Olympics were probably the best part of AP physics,” Meenakshi Dhamija, ‘18, said.

“The Physics Olympics are the heart of AP physics,” Kulak said. “We made the Olympics 15 years ago to represent friendly competition, spirit, friendship, and patriotism.”

Check out the photo gallery below.