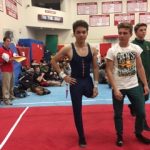 Having his left leg amputated at one month old due to a blood clot, Mekailo Woodfork,‘19, isn’t a typical student athlete. But having a prosthetic leg has not stopped him from finding his sport at Conant. Always wanting to compete, Woodfork picked gymnastics after trying out gymnastics equipment in freshman P.E.

“My first reaction was shock.  It’s so rare that a student with a prosthetic leg competes in gymnastics,” freshman boys gymnastics coach Anthony Avella said.

He added, “My next reaction was curiosity and me questioning how this would work.” Avella said Woodfork’s teammates, too, wondered how he would compete.

Gymnastics requires strength from all around the body, balance, proper use of momentum, and stamina–skills that can be tough for anyone, but particularly tough for someone with a physical disability.

For Woodfork, his big challenges are stamina and balance. “I’m always hopping around on one leg, and a lot of times I’m standing still, which is really exhausting, and since I’m out of balance, it is even more work,” said Woodfork.

Despite these demanding challenges, Woodfork was able to compete most of his freshmen season on the high bars, to which Avella largely credits his work ethic.

Woodfork was subsequently named team MVP for that accomplishment.

Life on the Still Rings

By the time Woodfork had become a sophomore, he had found a new event, the still rings. Unlike his freshman year, his sophomore year would mean more than just being able to compete in meets.

According to Woodfork, he believes his most significant accomplishment is finishing 15th in the junior varsity conference meet at Barrington High School on April 26 for his performance on the still rings.

“I felt like the practice and hard work paid off in a big way,” said Woodfork.

Another significant accomplishment occurred at Conant’s freshmen-sophomore gymnastics meet, where Woodfork scored a 7.1 on the rings. Scoring for gymnastics is out of ten points, but a seven is a very high score at the high school level. Woodfork scored only one of the three “sevens” for Conant at that meet.

But most meets for Woodfork are not like this. Woodfork said the difficult moments are “practicing really hard in the gym and then not getting good scores.”

In the front lever, Woodfork is horizontal to the floor–his back down, his head up–and holds this position for at least two seconds. Junior varsity coach Matthew Meyer pointed out that none of Woodfork’s teammates are able to perform this trick.

In the backflip dismount, Woodfork swings while below the rings, pulls his body behind him, lets himself go, and then lands one foot. All of these steps are done in one motion.  Watch Woodfork perform these skills here:

Both of Woodfork’s coaches say he spends extra time in the gym, and he often is forced to work harder than other teammates.

“I feel like he works harder than anyone else because he has to, he wants to, and he is determined,” said teammate Taras Tarnovetskyi,‘19. “When I see him work harder it makes me want to work harder.”

“[Woodfork’s involvement] has taught me that any athlete can compete regardless of disability, to not count anybody out, ever,” said Avella.