“Guys can get away with dressing however they want, so why can’t [girls]?” said Conant junior Nicole Hennings.

All over the country, girls are speaking out against “sexist dress codes”. The feminist movement is well underway with prominent figures such as Emma Watson speaking out against sexism. Subsequently, women’s rights are gaining attention and support very rapidly, and girls all over are jumping to defend themselves against the ban of certain types of clothing, claiming that dress codes are sexist.

The image below was posted in a Montreal High School to protest the “sexism” present in school dress codes. The picture soon went viral on social media:

The sign that went viral posted in a Montreal school.

Are dress codes sexist and in place to prevent girls from “distracting” the boys, as accused in social media? Or are dress codes simply an attempt to maintain an appropriate learning environment?

In a Twitter interview,  Averi, a high school student from North Carolina, addressed the ban of leggings at her school. “Our school banned leggings so we would be ‘dressed to learn’ and to ‘avoid distraction'”, she said. “I do not agree with schools banning girls’ clothes to avoid distraction. I see it as unjust and very sexualizing.”

Students of both genders do not seem to find the excuse “to avoid distraction” relevant. When asked whether it is appropriate for schools to ban girls’ clothing to avoid distracting boys, Dhruv Patel, a Conant junior, sees it as a violation of student rights. He said, “Students have the right to dress how they want. They hold [boys] accountable for a lot of things, they should hold us accountable for not being distracted; I mean they gave us iPads, and they expect us to be distracted by girls?”

A few other Conant boys expressed the same opinion. Some came to the consensus that if a girl was dressed in clothing deemed “inappropriate” by administration, she would not be a distraction from learning.

There is still some controversy in Conant about the equalities of the school dress code. Junior Shelby Epich pointed out, “I’ve never seen a guy dress code at Conant.” When asked, many girls stated that they have never seen a boy get called out on a dress code violation, such as sagging pants or inappropriate messages on clothing. However, a few teachers have different opinions.

Math teacher Amy Differding says that she would have no problem calling a boy out on a dress code violation. Social Studies teacher Greg Gillette says that he has called out boys on dress code infractions. He stated that although tight or revealing clothes have no place in a high school, he refrains from commenting on girls’ clothing. Other male teachers agreed, and said that they would not call out a girl because they would not want to make her feel uncomfortable.

Teachers don’t seem to see a problem with student dress codes. They see dress codes as a way of maintaining an appropriate learning environment. However, many students find dress codes sexist and against student’s rights. Will students and teachers ever come to an agreement about what is acceptable school attire? Only time will tell. 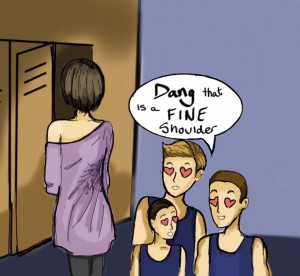 Jennifer is a junior at Conant. This is her first year on the Crier. She is a cross country and track runner and a cellist in the Conant orchestra. Jennifer also enjoys reading, writing and listening to eighties music.