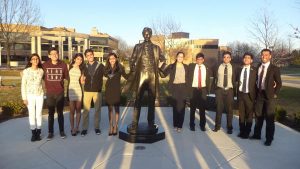 The debate team at the IHSA state congressional debate tournament.

After placing third in the IHSA state congressional debate tournament for the first time in history, the CHS Debate Team concluded their best season ever, according to Head Coach Frank Kernats, on March 18. The third-place finish happened at the University of Illinois-Springfield on March 17-18.

The IHSA state tournament was an individual and team competition. As a team, Conant debaters placed third. Ten debaters were selected by coaches Frank Kernats and Denise Mitchell to represent Conant in the individual competition, and seven advanced to the semi-final round. Semi-finalists included Keshav Shivam, ‘17, Akash Moozhayil, ‘17, Bhavana Bheem, ‘17, Aditi Katwala, ‘18, Dhvanii Raval, ‘18, Nitin Subramanian, ‘18, and team captain Kunal Mahajan, ‘17. From there, Subramanian and Katwala advanced to the final round and finished fourth and fifth, respectively. No Conant debater has ever placed this high in the past.

Shivam and Subramanian both made the IHSA All-State debate team, a team that includes ten debaters that had the highest preliminary round scores. This is Shivam’s second year on the team.

Kernats said, “I am very proud to be [their] coach. I would not trade my team for any other team in the state.”

Unlike the Springfield tournament, the rest of the tournaments the debaters compete in are run by the Illinois Congressional Debate Association (ICDA). These tournaments are also considered both individual and team competitions. There were six ICDA tournaments this year, including the state meet, and Conant placed at every tournament but one.

Conant placed first in the second ICDA Tournament held at Dundee-Crown on Oct.15. The debaters placed second at the first and fourth ICDA Tournaments, held at Hersey and Elk Grove, respectively.

Subramanian said, “I’m still disappointed that we didn’t achieve our goal of winning a state championship, but that will be our goal next year.”

The debate team also competed in the Tournament of Champions (TOC) tournament held in conjunction with the fifth ICDA Tournament at Addison Trail on Jan. 28. Similar to the ICDA state meet, there were two different tournaments, an invitational and TOC tournament. Conant had nine debaters qualify for TOC, three of which became finalists. Finalists were Katwala, Subramanian, and Shivam. Conant placed second as a team.

The debate team is very proud of the team and individual awards they have won. Mahajan said, “We only expected one [team award], but we have managed to finesse five team awards in six tournaments. We are very proud.”

The debate team believes their the future is bright. A major reason for that is a strong group of freshmen that debated this season. Subramanian said, “I’m especially proud of our freshmen; they came in and worked really hard.”

But before looking to the future the debate team would like to thank the original four. The members of that group included seniors Mahajan, Shivam, Arjun Rao,‘17 and Michael Kim,‘17. Kernats credits them for “saving the team” as well as recruiting other debaters to join the team. Kernats believed that the team could’ve become defunct without them.