Dedication and persistence: CHS gymnast makes a comeback despite injury

She concentrated on her warm-ups and kept her posture straight. As she prepared herself, she felt nervous and afraid. She had done this millions of times; she had nothing to fear. She took a deep breath and started to perform. Just as she settled into her rhythm, her foot slipped off the balance beam, and she went down.

Bailey Bloom, ‘18, remembers this fall every day, but she says she doesn’t let it bring her down. Missing the gymnastics State finals during the 2016 season, she was determined not to let her setback get in the way of her goal during this year’s state meet. Bloom persevered and overcame her injury, topping off her third year on the varsity team with a fifth place medal on beam at the State tournament. 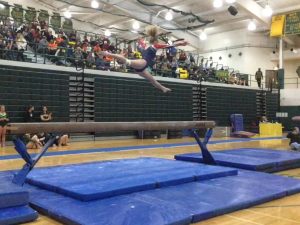 During the regular 2017 season, Bloom injured her leg after a fall from practicing on the beam. “I fell on beam during a meet and bruised the tendon in my knee. It was scary because my goal was to make it to State on beam. So, I couldn’t practice for a while,” Bloom explained.

The injury was so severe that gymnastics coach Anthony Avella was afraid she wouldn’t be able to compete with the team again.

“I was uncertain of her return,” Avella said, “but she made sure to complete her therapy, which really says a lot about her as an athlete because the easier option would’ve been to not come back.”

Bloom said, “I just went through with the therapy and came back to accomplish my goals.”

Despite her slow and tedious recovery, Bloom said she remained positive and came back to compete as strong as ever. Avella said, “That really sends a good message, especially to the younger girls on the team. It shows the true dedication [gymnastics] actually takes.”

Bloom missed out on the State finals by a quarter of a tenth of a point last year, and she said it had been her goal to make it to the finals during this year’s State competition. However, another fall during her warm-up almost set her back.

During her second warm up, she said she ended up falling the same way she fell when she injured herself back in January.

“That ended the warm up. That was it. That definitely spooked her. But thankfully, of the ten girls that were to compete, Bailey was ninth,” Avella explained.

Bloom said she had time to calm down, but said she felt scared, nervous, and doubtful. “It was really nerve wracking, since we go one at a time,” she remembered. “But I think that made me do better, as I was under pressure.”

Members of the varsity team found Bloom’s performance to be inspiring. After viewing Bloom’s routine, Kennedy O’Connor, ‘20, said, “I thought the routine was truly inspiring because she was still able to perform at her best, despite her nasty fall during warm ups.”

Going into the State finals, Bloom was the ninth seed, but she finished fifth on beam. “I felt really surprised standing on the podium. I wasn’t even expecting to make it to the State finals. But I’m happy I did. I felt accomplished,” Bloom described.

In her three years as a varsity gymnast, Bloom has brought the mentality of hard work and determination, Avella explained. He said he hopes Bloom’s positivity and dedication influences the newer members of the team.

Throughout the season, the team endured many obstacles: mental, emotional and physical. To get past those conflicts, the girls relied on one another for moral support. O’Connor remembered, “During the season everyone was tired, sore, and injured, but Bailey helped keep our spirits up and kept us motivated to achieve our one goal: going to state as a team.”

The team did end up making it to state. Bloom’s teammate Isabella Ostrowski, ‘17, said confidence was a main component of their performances. She said Bloom’s confidence rubs off on the rest of the team, making the girls believe in themselves. “Bailey has not only helped me but everyone else in the gym through the support she brings,” Ostrowski said.

Bloom’s positivity also supports the girls. Julia Betts, ‘20, said, “Bailey has helped me improve with her encouragement throughout the season. She also does her gymnastics the best that she can, not only for herself but for the team as well. That’s why Bailey is a teammate I look up to.”

With Bloom’s final season coming up next year, she says, “My body is pretty done. I don’t plan on continuing my gymnastics career in college, but we’ll have to see.”