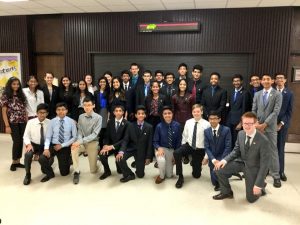 The Conant debate team did well at its first tournament of the year on Sept. 23, continuing the momentum of their best season in history last year. They placed fourth in the meet as a school with several members placing in their individual events. Hersey placed first, Fremd second, and Stevenson third.

Conant Captains Nitin Subramanian, ‘18, Dhvanii Raval, ‘18, and Aditi Katwala, ‘18, are hoping to continue this success throughout the season.

All team members do congressional debate, where 15-20 debaters gather in a room for a mock session of congress. There are 10-15 rooms in each meet with winners in each room.

Subramanian became the first Conant debater in history to be named Captain of Captains, or student president of all debaters, by the Illinois Congressional Debate Association (ICDA).

He said, “It’s special because it’s a role that’s chosen based on who the students across the state trust the most in making the right decisions for the future of debate in Illinois.”

The coaches attribute the success of the team to the senior leadership and member effort.

Assistant Coach Zia Nathan said, “This year we are lucky to have some fantastic leaders on our team. The varsity debaters have done a such a great job showing the younger members the ropes and leading them down a path of success.”

He added, “We also have a very special group of JV debaters who have been dedicated to supporting the team in anyway they can.”

Head Coach Frank Kernats shared his philosophy for the team, one that he attributes much of the team’s success in the past few years to.

He said, “Our goal is to try to be a debate team where the members of the team can reach their full potential and put their time into debate while still being able to balance their outside life.”

He said, “We want victories at the local, state, and national level, but the most important thing is for debaters to use intellectual persuasion and be respectful to all other teams.”