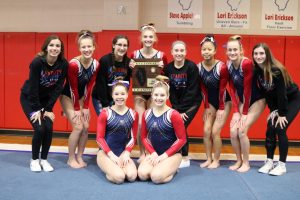 The team holds their plaque after winning first place at Regionals for the second year in a row.

The girls’ gymnastics team placed first in their Regional on Jan. 31 at Palatine, securing their Sectional spot and becoming back-to-back Regional Champions.

After placing 4th at the MSL Conference on Jan. 24, the team hoped to have fewer falls and more polished routines at Regionals.

He added that the team still pulled off a win despite falls and injuries.

Gymnasts that were injured included Kennedy O’Connor, ‘20, who was working on a double flip on the uneven bars during practice the night before and fell, bruising her legs.

O’Connor said, “Despite me being in pain, I knew I had to push through for the team and myself. I did my best on the events, and it paid off in the end.”

Julia Betts, ‘20, also competed after having been out most of the season due to a foot injury.

Betts said, “We have all been working extremely hard even with some injuries. With the support of each other, we lifted each other up and cheered each other on to make sure we had the confidence we needed.”

Avella said, “Physical and mental toughness was the reason for the team’s success at Regionals. The team showed grit coming in with these injuries and worked together as a team to keep fighting for each other.”

Five girls made the podium, which included the top five for each event, for their individual routines. Those five advanced to Sectionals.

Danielle Smith, ‘21, said, “I feel like our team is getting stronger and stronger every meet, so by the time sectionals come we will be the strongest ones out there.”

Avella said, “I’m hoping that the team can perform the routines the way that I know they can. I’m also hoping that we don’t have any mental blocks at the meet and have the same mental toughness as at the Regional.”

The Sectional meet is at Hoffman Estates today at 6 p.m.