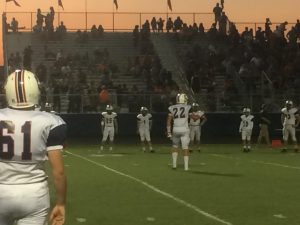 Captain Jack Reiger gives a pre-game speech to his team before a game against Hoffman Estates.

“It was tough, I’m not going to lie, being that responsible and having the team hold me accountable for everything,” said Reiger.

Reiger had an impressive night with 107 yards rushing and two touchdowns, along with 54 yards passing and an interception in his first game of the season in the wildcat formation.

But Reiger fumbled twice, contributing to the Cougars 26-18 overtime loss to Fremd. One happened on the first drive of the 2nd half, which allowed Fremd quarterback Andrew Saxe, ‘20, to score a two-yard rushing touchdown, making the score 10-6 Conant early in the 3rd quarter. On a 3rd-and-goal in overtime, Reiger fumbled again, ending the game.

“I felt as if I had let everyone down, but that’s all part of the game. I’m just going to fight harder next week,” said Reiger.

On Reiger’s performance, coach Bryan Stortz said, “Jack played his heart out, but we just didn’t have enough in the end.”

Center Eddy Gosche, ‘18, said, “I feel it was nice having Reiger get the ball directly. He did a great job and was able to throw the ball as well.”