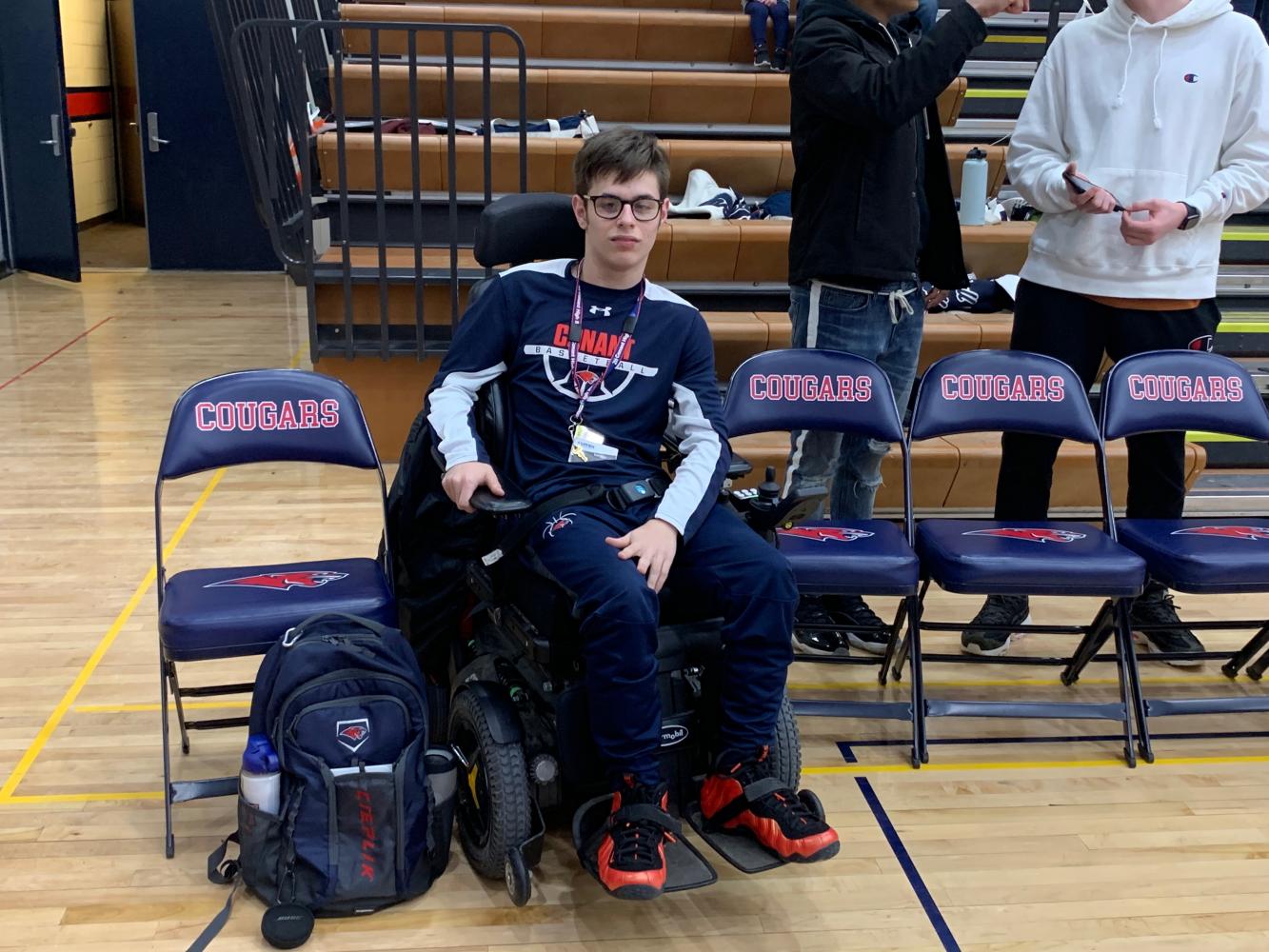 Cooper Hagler, ‘19, before a boys’ basketball game against Schaumburg on Jan. 25. Hagler, who has cerebral palsy, has been a manager on the varsity boys’ basketball team for the past two seasons.

Last season, when the boys’ basketball team lost to Libertyville on a last-second shot to end their season, the players consoled an unlikely person: a team manager.

The manager, Cooper Hagler, ‘19, said the moment meant a lot because it showed how much the team cared about him. “They realized how I was feeling,” Hagler said. “[They] hugged me and talked about how it was okay.”

Throughout the past two seasons, Hagler has driven the team to be the best they can be. They feed off of his spirit. They gain inspiration to play from him. They’ve learned larger life lessons from him.

Hagler’s spirit inspires the team because despite being diagnosed with cerebral palsy as a child, he has never let his limitations prevent him from being as involved as possible at Conant. Hagler’s condition makes it difficult for him to walk and forces him to use a wheelchair to get around most of the time. However, these challenges have not stopped him from loving sports and all things Conant. His passion, Hagler said, comes from watching different sports and watching different teams play. “I just like the competitive atmosphere and the way it can encourage people to do well and root for teams,” Hagler said.

Despite having to use a wheelchair, Hagler did find opportunities to play sports in the past, such as sled hockey and wheelchair basketball. To focus more on school and the basketball team, Hagler stopped playing these sports in 2017. Since then, he’s been able to leave a major impact on the team.

Captain and guard Anthony Wachal, ‘19, said, “The kid is just a happy, fun kid. There is not one evil bone in his body. He’s one of the greatest kids I’ve ever met.”

Hagler has multiple ways of helping the team, such as taking stats using his iPad and being vocal during games. Special Education Teacher Assistant Scott Cieplik, who normally assists Hagler during basketball games, said, “He’s more vocal this year than he’s ever been. Every time you see him, he’s either yelling at a player to get back on defense or pass the ball. He always wants that extra pass, which is what all coaches want in basketball. He’s definitely a workhorse at his craft right now.”

Hagler said, “I feel like if I can bring my passion and energy, I hope that brings a lot of energy to the kids that are playing.”

Guard Ranier Roque, ‘19, said, “He really touches us. He’s a really important part of this team. Without him, we would not have that much inspiration to play with.”

The coaching staff appreciates Hagler’s contributions, too. Head coach Jim Maley said, “He obviously has challenges that all of our other guys don’t have to face, and I think it’s very admirable how he continues to pursue what he wants to do, and I think our guys really appreciate that about him.”

The team’s appreciation for Hagler goes beyond the basketball court. On some Sundays, members of the team go to Hagler’s house to watch football or hang out. “It means a lot to me,” Hagler said. “It shows they care a lot about me and that they appreciate me being a part of the team.”

“He’s just like the rest of us when we hang out with him,” Wachal said.

After graduation, Hagler will work on becoming more independent by attending the Illinois Center for Rehabilitation and Education (ICRE).

Hagler said, “I’m forever grateful for the opportunities that the Conant basketball team has given me for me to be a manager.”