Girls’ gymnastics fourth in Conference, hope to do better at regionals 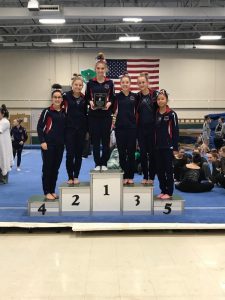 The girls’ gymnastics team on the podium after their 3rd place win at York on January 20.

Coach Anthony Avella said, “We started off the first two events with a strong showing on floor.”

He added that he was happy that the girls were able to perform new skills for the first time at the meet. However, he felt that the second two events were not as strong.

Avella said, “We still didn’t quite hit our routines in the last two events, which is something we still have to work on.”

Kennedy O’Connor, ‘20, who performed in all-around, floor, and vault, said, “We didn’t do as well as we had hoped for, but that’s only going to give us the determination to go and clean up our routines and work even harder.”

Avella believes the team still has opportunities to improve.“It’s important to perform routines effortlessly,” he said. “If you want to be a successful program for the long run, then we need to be able to adapt well.”

O’Connor said, “I think conference went okay for me. I had a few wobbles on the beam and bars, but vault and floor were strong. I think my best event was floor, which I placed 8th on with a score of 9.2.”

As the team heads to regionals, Avella stressed the importance of doing well as the top teams and top five individuals will automatically qualify for sectionals.

O’Connor said, “In the end, I am hoping for the team to qualify for state. Last year, we qualified to state as a team, and it was an amazing experience that I would love to relive.”