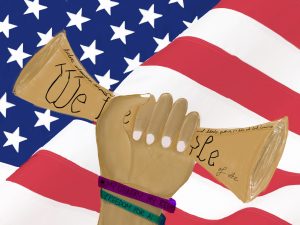 “Together we stand, divided we fall,” sang founding father John Dickinson prior to the Revolutionary War. Although not a physical war, the 2016 election has created a political battlefield. With Donald Trump elected to the presidential office, citizens of the US need to remain unified and open-minded. The Crier believes Conant needs to stand together as a community, but students also need to be active citizens by speaking out against discrimination.

The fear many people are feeling following Trump’s election is not imaginary. Trump has demeaned women publically and made derogatory comments towards the LGBT community, Mexicans, and Muslims. Incidents of hate crime in the past few days, such as the alleged robbery of a Muslim student at San Diego State University by two anti-Muslim Trump supporters, is enough to spread fear among minority populations and those who desire a safe, respectful America.

However, we need not be afraid, especially when we live in such an accepting Conant community where diversity is a norm. We should embrace change and hope Trump will be able to improve America through his foreign and domestic plans as he promised throughout his campaign. We should also speak out against discrimination rather than be bystanders.

The first step to attaining unity is accepting that, although flawed in many ways, Trump is our president. Hoping Trump fails is the same as hoping our country fails. Instead, we must be open-minded in our approach and remember that the power lies with the people. We are still guaranteed rights by the Constitution and by decisions of Supreme Court rulings.

What we can do as citizens is exercise our rights. The First Amendment of the Constitution guarantees all citizens the freedom of speech. Nevertheless, due to fear, many students may not feel safe voicing their opinions, especially after Trump has spread so much anti-minority, anti-women, and xenophobic sentiment. However, it is of utmost importance that students do voice their opinions in order to create awareness of key issues.

Discussion yields greater understanding. We are fortunate to attend a school where we encounter many different cultures on a daily basis. It enables us to learn about and empathize with cultures other than our own. For example, if a student understands the religious significance of wearing a hijab, they no longer will interpret it as a symbol of terrorism. The diversity at CHS allows students the opportunity to expand their knowledge and become worldly citizens.

However, it is also important to remember that while free speech may give us the right to speak our minds, it doesn’t give a “free pass” for making xenophobic, racist, sexist, homophobic or otherwise belittling comments. Our words still have consequences, and it’s important to be uplifting and productive rather than hateful.

Additionally, students need to make sure that they are active citizens, which entails getting educated about politics and voting. The 11,000 ballots wasted on writing “Harambe,” the name of a dead gorilla, are among hundreds of thousands of write-ins that were counted as unofficial votes. Voting-age Americans in the 2016 election have proven that every vote matters.

The outcome of the 2016 election could have been different if young voters hadn’t underestimated the power of their vote. For example, the majority of millennials in all but four states favored Clinton over Trump, but only 19 percent came out to vote. Rather than disengaging, like many did after Bernie Sanders lost the primary, students need to exercise their rights and vote for what they believe in.

In four years, every student at CHS will be able to vote, and they need to utilize their time and resources at CHS so they can make an informed decision. Current juniors and seniors need to be prepared not only for the presidential election in 2020, but also for the 2018 mid-term elections. Voting is their opportunity to have their voices be heard.

During such a tense political time, it is our moral imperative to stay united as a community regardless of political affiliations. The high schoolers of today are the leaders of tomorrow. Only by becoming informed, open-minded, and active citizens at the pinnacle of political disagreement, will high schoolers be prepared to keep the US unified in the future.