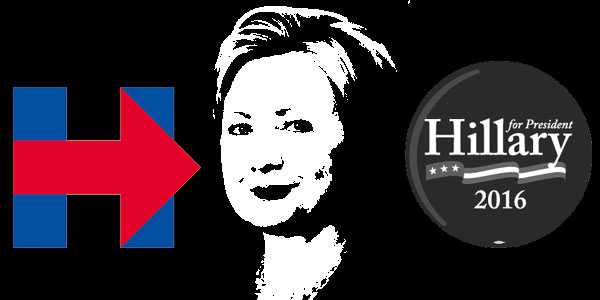 By the standards of “political time,” where in one day a candidate can go from frontrunner to underdog, the 2016 presidential election awaits. It will soon be the time where after eight years, President Barack Obama will step down and pass on his title to a new candidate. From this point, signs point to Hillary Clinton winning the White House and becoming America’s first female president.

Political reality leads me to believe that unless there is a radical change in the Republican party, Hillary has this win locked up. Not only does she have the win locked up, she’s got the key and has already swallowed it.

Here are five reasons as to why Hillary Clinton is poised to take over the presidency:

This is the time where the feminists unite, like they once did in the 1920s. A great social movement to elect the first Madame President is gathering wind and will reach sustained hurricane strength.

Similar to the movement that elected the first African-American president in 2008, the Madame President movement will be propelled by all forms of media. Together they will build momentum and coalitions across every platform, while reveling in their awesome social and cultural significance. People are going to vote to make history and each vote will be used as a hammer to break through the glass ceiling of the Oval Office.

All the political pundits are exclaiming “It’s her time,” and “She deserves it!” There is no doubt that they will keep screaming until our next election is over.

Hillary is a woman that has been humiliated multiple times, and now is her time to shine. She was publicly vanquished by her cheating husband, but she sprung back when elected to the U.S. Senate in 2000. She suffered even more when she was defeated by her own party for the presidential nomination in 2008, and further thrown to the dogs when she was rejected by Obama to be his running mate. During her time as Secretary of State, Hillary became caught up in the 2012 Benghazi situation causing many to have mixed feelings about her. Hillary was accused of faking a concussion to avoid testifying before Congress about the Benghazi Scandal and the almost routine assertion that the White House had left those in Benghazi to die during the crisis. The Benghazi attack took place on the evening of September 11, 2012, when Islamic militants attacked the American diplomatic compound in Benghazi, Libya, killing U.S. Ambassador J. Christopher Stevens and U.S. Foreign Service Information Management Officer Sean Smith.

But today, she’s made a name for herself and will not stop until she has reached her goals. To be bombarded even further, she became caught up in the “email scandal,” where she reportedly deleted 30,000 emails of public significance on her private electronic device. Her belated explanations have not sufficed, and experts on all sides are wondering whether the former first lady and likely 2016 presidential candidate may have jeopardized US interests by using a vulnerable form of communication and deleting many of her emails. Though she was caught up in these scandals, she still held her head high. She had brilliant ideas on the empowerment of women and her push to move beyond government-to-government engagement to work with civil society.

Therefore, because of her ups and downs, the unholy alliance of cultural and media forces truly believes that it’s her time, and that she deserves it. This groupthink will make for a toxic punch of media bias that the poor Republican presidential candidate will be forced to drink on a daily basis.

The Ready for Hillary PAC, Hillary’s campaign-in-waiting, is turning itself into her official campaign, as soon as she gives orders to make it official.

Jeremy Bird and Mitch Stewart, campaign organizers, have been hired to build an organization similar to President Obama’s two nearly flawless, state-of-the-art campaigns. It would be nearly impossible for the Republican candidate to quickly build and match what will then be a huge national campaign organization (with a three-year head start). Unfortunately, the republican candidate is likely to be crushed.

Both Obama and Mitt Romney eventually raised a billion dollars for the 2012 presidential campaign; however, Obama took advantage of early money and put it to great use, negatively defining and attacking Romney throughout the run.

In fact, it was announced that Ready for Hillary had raised over a million dollars in June 2013, without its candidate, of course. She can use this money to her advantage in many ways, such as building up her campaign to be even stronger, advertising, and touring around the United States to help guarantee votes. Between now and 2016, Hillary can easily raise more than a billion dollars, judging from her husband’s money raising talent and previous records from the Democratic Party. This early money will give Hillary the same advantage Obama had to smear whoever emerges as her opponent.

5. Her husband, Bill Clinton, was the president once

During last summer’s Democratic National Convention, Bill Clinton convinced America to vote for President Obama in what was known as such an eloquent speech that it made Romney seem small by comparison.

At that moment, Democrats and their media allies experienced a tsunami of feel-good Clinton nostalgia that continues to this day, and “Hillary 2016” is the supreme beneficiary. Furthermore, from a pop culture/media perspective, her leaner, vegetarian, highly evolved, totally rebranded, well-respected charitable husband (of Clinton Global Initiative fame) will be one of Hillary’s greatest assets on the campaign trail. After all, he was president before, but let’s not think about that. His time as president will give her someone with immense experience on her side. Bill Clinton is regarded as one of the best presidents the United States has had (according to the Washington Post), which means he will be a great ally for Hillary for her campaign, as he will be able to provide her with advice and insight into the presidency.

Because of reasons No. 1 through 5, she is poised to win in 2016 because frankly, there is no one who can stop her–unless there are unforeseen national events that dramatically alter the current economic and political landscape or Hillary drops out even before she gets in. This woman has the power to pick herself up when she’s thrown down. She knows what she is doing.

The best we can hope for is that the presidential election campaign in 2016 will be fair, clean, and without media bias.

As much as I’d like for a republican to win, I must say, I will be very proud to finally have a woman  take charge and run our nation.