Face-Off: Are we too politically correct?

Are We Too Politically Correct?

Face Off Debate between Aditi Katwala and Annika Layfatis 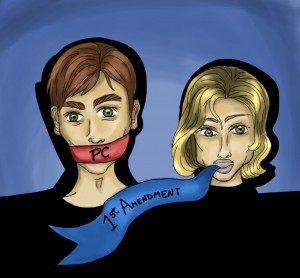 Spoken Mind over a Held Tongue

Position: We as a society are too politically correct.

In our culture, we’ve begun to fear the conclusions people make from what we say and how we say it. We worry that people will think we’re biased toward a religion or sexual orientation, or that we are racist. The obligation to be politically correct dominates every conversation. If someone says anything even remotely controversial, they’ll run the risk of being labeled as a narrow-minded bigot.

We no longer promote freedom of speech, instead keeping quiet to avoid being considered “rude.” Even when acting respectfully when hearing and presenting opinions, we force ourselves to censor our thoughts. People now look for reasons to be “offended,” scrutinizing every word to find a hidden prejudice. For example, a person might call someone “black” and as a result be slapped with the label “racist,” even if the word wasn’t meant to be offending.

The valued placed on political correctness seems to suggest that a held tongue is better than candid speech. I think we’re made of stronger stuff, so taking the “sticks and stones” approach is a good idea. Just because a person “perceives” an insult doesn’t mean they are right.

The craze to be politically correct has soared to new heights; even description words have become insults. The word “short” for example, is now politically incorrect. Instead, people choose to say “vertically challenged.” Even the very constructs of language- pronouns such as him and her- are being challenged because of their potential “discrimination” towards generals. “Own” is not acceptable because it shows possession. Does this mark the official deterioration of the dictionary?

I still agree that some terms should never be used in everyday talk. Racial slurs and swear words, for example, shouldn’t be thrown around because that is rude. However, there is a difference between hate-filled speech versus normal conversation.

While I may not agree with someone’s opinion, I should be able to say so without reparation. America represents the freedom to exchange ideas without fear of punishment. Articulating ideas without worrying about oversensitivity is the only healthy means of discussion. As we tone down our freedom of speech and ability to discuss, we are tearing the Constitution of the United States apart. This is America, land of freedom. We can say whatever we want to.

Courtesy as well as Construct

Position: The extent of political correctness is necessary.

Being “politically correct” or “PC,” as it is commonly called, is often seen as a necessary but irritating aspect of working in a professional environment. In school, we groan about using the term “Winter Break” instead of “Christmas Break.” Meanwhile, phrases like “man up” or “that’s so gay” are thrown about without a second thought to the deeper meanings they imply. Thus, being politically correct is important for showing professional respect to those around us, and vital for communicating in a positive manner.

Political correctness is a complex issue because different people react differently to certain language usage. For instance, the movement for “people-first language” (i.e., saying “person with autism” instead of “autistic person”) appears to be a better way to discuss disability.

Even though changes in language may only slightly affect the connotation, they can still be important. Old languages can carry a lot of baggage, and while we all have the freedom of speech, this does not mean that our word choice is of no consequence. Derogatory speech is alienating and unproductive in conversation, while using politically correct language is common courtesy to those around you. When we hear it, we feel validated, and when we use it, we show respect for our peers.

Granted, being politically correct isn’t easy. It’s not just substituting “Native American” for “Indian.” It is making a conscious effort to filter your language, and to avoid language perceived as offensive to marginalized groups.

If that seems like a burden, then consider being on the receiving end of the problematic comments. Even if the remarks are only subtly demeaning, they add up quickly, and can dramatically affect how someone feels about their identity. Our freedom of speech is not compromised by political correctness, and “PC” talk leads to polite and constructive communication where everyone involved feels respected.