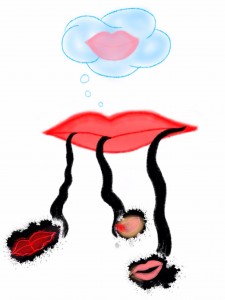 Is the gain worth the pain?

In today’s society, we model our ideals of beauty off of what we see on MTV and the cover of People magazine. Young, impressionable girls crave to look just like Ariana Grande by mirroring her make-up or like Miley Cyrus by mimicking her hairstyle. But, how far is too far to achieve that magazine cover beauty? Recently, many teens have been doing the “Kylie Jenner Lip challenge.”  Kylie Jenner, a 17 year old supermodel and the daughter of celebrities Bruce and Kris Jenner, set a new trend of having plump, voluminous lips. Many of her teen followers mirror her image to also achieve full lips. Sounds harmless, right? Wrong.

In order to volumize their lips like Kylie’s, young fans have begun to suck on shot glasses for five minutes before pulling it off and achieving what is considered to be “plump perfection.”  These girls idealize Kylie Jenner’s beauty and blindly follow her trends, no matter how dangerous. And this has shown to be risky for the millions of young followers Kylie has. 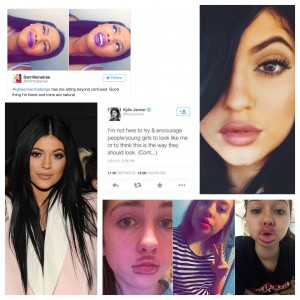 “The new trend in trying to DIY lip plumping is quite concerning,” Dendy Engelman, a dermatologist surgeon told the Washington Post. “Not only can significant pain, swelling, and bruising result from these suction techniques, but there is potential risk for scarring and permanent disfigurement with repeated attempts.” Additionally, Dr. Salzberg, an associate professor of plastic surgery, told CBS news “the stunt has the potential to cause problems including micro-trauma to the vessels of the lips, scarring, hematoma or thickening of the tissue around the lips that can cause disfigurement and deformities.” Suctioning lips can and has caused bruising on the face, bleeding lips, swelling, discoloration, and many other painful plumping effects, yet girls still do it to match the lips of their celebrity idol. Lip plumping just gives an insight on how far people will go to be the next cover girl.

Besides being dangerous, lip plumping has also caused social uproar. The “Kylie Jenner lips” are meant to mimic the full lips that some black women have. Now, by following this internet trend, followers are not only scarring themselves, but they are also scarring the image the image of black beauty. According to a Washington post article covering the topic, Twitter user Darillionaire tweeted along with a picture of her naturally plump lips “#KylieJennerChallenge has me sitting beyond confused. Good thing I’m black and mine are natural.” So, not only is this new fashion statement frowned upon by doctors, but it has also been interpreted as a racial mockery of the beautiful lips of African Americans.

However, Kylie Jenner claims that her full lips are natural. Never has she used this alleged “Kylie Jenner technique” to plump up her own lips.  Kylie herself told CBS news, “I haven’t had plastic surgery. People flash back to pictures of me when I was 12 and say ‘Kylie’s so different’ but how can I look the same from 12-18?” She went on to say, “I’m not here to try and encourage people/young girls to look like me or to think this is the way they should look.” Jenner’s lips are and always have been naturally voluminous. She has never altered her physical appearance, nor does she encourage it, so why should her followers?

The Kylie Jenner Challenge is dangerous for the participant, causes racial tensions, and isn’t even done by Kylie Jenner herself. In today’s society, we have become obsessed with society’s idea of beauty without thinking of the consequences. We need to stop fawning over the newest lip trend and start relishing in our natural beauty. So put down the cup and put on a smile because that’s all you need.