No need to ban fidget spinners 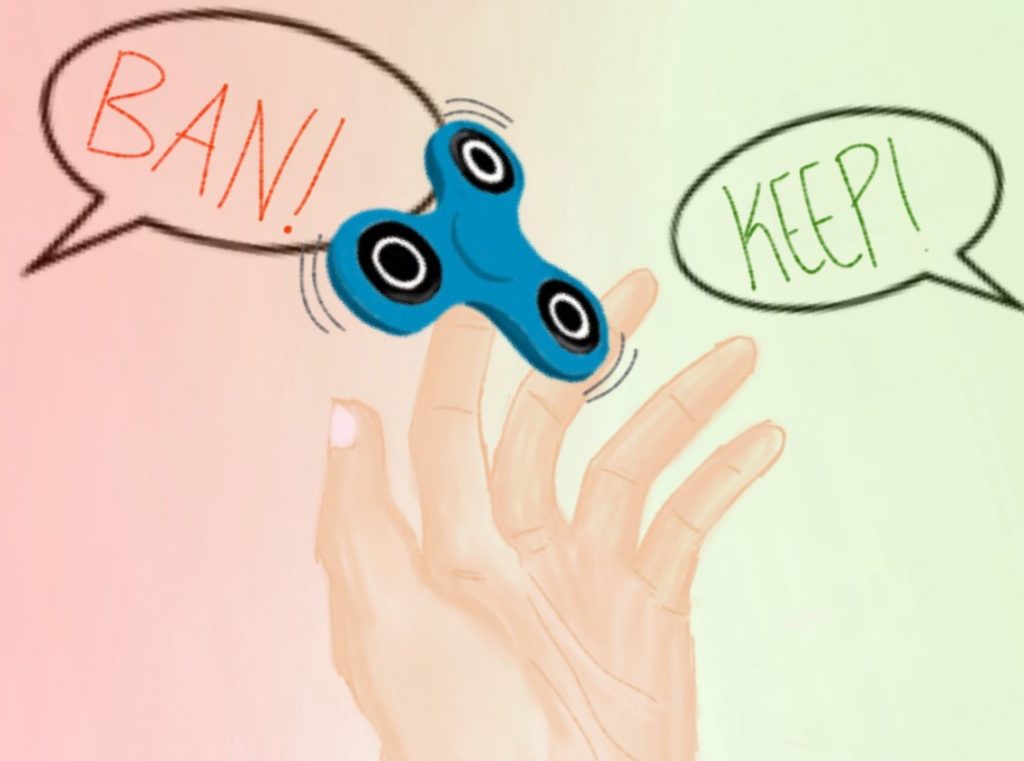 Look around practically any classroom in America and, more likely than not, you’ll see at least one student playing with a colorful plastic fidget spinner or fidget cube. Like any other classroom craze, fidget toys have attracted their share of controversy.

Although some people see the toys as useless distractions, many students find fidget toys to be helpful for concentration, and they should be allowed to use them in school as long as they are responsible and use them for their intended purpose.

Although fidgeting has gained immense popularity lately, it is by no means a recent fad. Students have been fidgeting in classrooms since well before the brightly colored toys fell into fashion. At some point in their education, most students have absentmindedly bounced their leg during a stressful test, tapped their pencil on the table during a long lecture, or been admonished by a teacher for rocking dangerously backwards in their chair. The wide variety of fidget toys on the market simply provide a new alternative to these behaviors, and students should be allowed to use any tools they find helpful for focusing in class.

Proponents of fidget toys claim that they offer a long list of benefits such as helping people focus, improving creativity, and being beneficial for people with ADHD, autism, and anxiety. Although some of these claims are dubious marketing ploys and have been debunked by experts, some of the benefits of fidgeting have, in fact, been scientifically proven. A study published in the American Journal of Preventative Medicine found that people who were sedentary for much of the day but fidgeted were healthier overall than people who were sedentary but did not fidget.

Despite the benefits of fidgeting, some people believe the toys do more harm than good. Many schools have banned fidget spinners on the grounds that they are distracting to students. While fidget toys can present some difficulties in the classroom if students treat them as collectibles or use them for purposes other than simply fidgeting, they ultimately have more benefits than disadvantages.

Fidget toys are relatively small and unobtrusive, and, depending on the type of fidget toy, can be quieter than other common types of fidgeting such as pencil-tapping. As any student can attest, any unnecessary noise can be incredibly distracting in a quiet classroom, and the relatively quiet fidget toys, when used in moderation, provide a happy medium for both fidgeting students and their classmates so that everyone has a good learning environment.

Considering the benefits fidgeting can provide for many students, it would be unwise to ban fidget toys altogether. Instead, schools should encourage students to use fidget toys responsibly and respect the needs of classmates who work best without disturbances. Fidget toys need not cause distractions when used properly. Conant has not yet made any rules regarding fidget toys, and this “hands-off” policy has worked well so far. As long as students know their own needs and use fidget toys responsibly in class, there is no reason to discourage something that many students have found helpful.