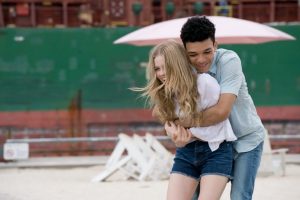 Angourie Rice as Rhiannon and Justice Smith as Justin

At first, the premise of the new film “Every Day” seems like it should be a breath of fresh air and creativity in a sea of formulaic teen romance movies. Based on author David Leviathan’s bestselling book of the same name, “Every Day” follows the relationship of a high school girl and a spirit who wakes up in a different body every day. However, the creative idea never reaches its full potential, as the film suffers from a generic plot and underdeveloped characters.

At the start of the film, protagonist Rhiannon (Angourie Rice) leads a fairly normal life. However, her predictable routine is turned upside-down when her boyfriend Justin (Justice Smith), who is usually self-centered and sullen, begins acting strangely caring and attentive. It is soon revealed that Justin has been temporarily taken over by a benevolent soul named A. As Rhiannon and A, who takes the form of a different person every day, find themselves falling in love over the course of several weeks, they begin to realize that being together might be more difficult than they expected.

Although adding this unusual barrier to the couple’s relationship seems like it would be an interesting twist, the movie never manages to elevate itself beyond the typical romance movie. The pacing is inconsistent, ranging from rushed to tediously slow, and at some points the plot seems to go off on a tangent. One confusing flashback sequence made it seem like the end of the movie was approaching. Unfortunately, it turned out to be the middle of the film with another 40 minutes left. However, the pacing improved towards the end, which was more engaging.

The only real source of conflict in the film was the difficulty of Rhiannon and A’s situation, which made the story seem one-dimensional at times. Although other conflicts were included, they were underdeveloped and quickly resolved, which was a shame because they could have introduced interesting and complicated aspects to the story. For instance, Rhiannon’s possessive boyfriend Justin seemed like he could provide some interesting challenges to Rhiannon and A’s relationship, but this storyline was never fully explored.

The movie also fell short of its promise to tell a diverse and innovative romance, which was frequently mentioned in its promotional coverage. A is described as genderless and can appear as any person. However, on most of the days Rhiannon and A spent a lot of time together, A took the form of a white male. This ultimately made the movie’s message of diversity and acceptance seem superficial. Although A was portrayed well by 15 talented actors, not all of them were given the screen time they deserved.

Despite its flaws, “Every Day” still delivers a sweet and entertaining story. A and Rhiannon’s connection is portrayed in a way that feels genuine, and you can’t help rooting for them as they get to know each other day by day. The plot eventually developed past a simple love story, and a few meaningful conversations made for an interesting ending. However, these ultimately came too little, too late to make the movie genuinely engaging.

On the whole, “Every Day” is a good option if all you want is a typical romance, but anyone looking for something more will be disappointed. If you don’t have high expectations going into the theater, it can be an enjoyable film. However, there’s definitely a better use for 95 minutes of your time.