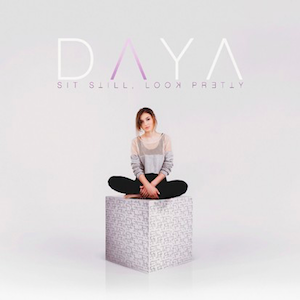 Being a young girl and growing up in a society which places many expectations upon the ideals of beauty and perfection is tough. Everyone knows this, and many artists are trying to cash in on this fact. Seventeen-year-old Daya released her debut album “Sit Still, Look Pretty” on Oct. 7, which makes a mediocre attempt at facing the issue of female empowerment.

The breakthrough single “Hideaway” topped at number 23 on the Billboard Hot 100. The single highlights stepping out of the social norms placed on teenage relationships, so it’s no surprise that her rest of the album also emphasizes girl empowerment and confidence.

The album starts off with probably the strongest and best-written track of the entire album, “Dare.” With rebellious and edgy lyrics, “You can dare me to step over the edge, I dare you to dare me to go play with fire, I’m gonna do everything that you never did,” the song exemplifies the message of overcoming others’ doubts and proving self-worth. The upbeat music is an enticing introduction which sets the tone to the light-hearted yet confident mood the album has.

Overall, the album has a smooth flow from track to track as it transitions from talking about the excitement a young girl feels when thinking about that special someone, such as in “Cool”, to not conforming to society’s strains on the perfect image of a teenage girl in “Sit Still, Look Pretty”. She does an excellent job of maintaining the positive and fun tone as she jumps from topic to topic, which can be difficult to achieve for breakthrough artists.

Besides talking about confidence, Daya also touches on boy troubles in “I.C.Y.M.I”, “Love of My Life”, and “Thirsty”. Many of these songs discuss similar issues related to young love and heartbreak, for example, “All they ever say is we’re too young to ever fall in love, but I know I want to.” Towards the middle of the album, this concept gets quite cliche, which defeats the purpose of the original empowering track that she started with.

The album fits in well with teen pop norms and presents a catchy tune with every track. But these ideas can get overused, and although she tries to redefine the typical images seen with a young girl, ironically many of her tracks degrade that message when she constantly just focuses on the ideas of teenage heartbreak.

The album has an overall enthusiastic pop sound but with an electronic EDM beat to every track. It’s no surprise that Daya chooses to have an EDM sound in her album from her appearance in The Chainsmokers’ “Don’t Let Me Down.” Aspects of the EDM sound in her album sound similar to the music composed by The Chainsmokers and Rozes. The EDM proves to be a delightful twist on this bubble-gum pop, as you find yourself almost wanting to dance throughout the whole album. The music choreography definitely aids the upbeat message of confidence that Daya presents in her debut album especially in “Legendary” and “Sit Still, Look Pretty.”

Young female artists such as Alessia Cara and Bea Miller have also had similar music conveying the same themes. The last track, “We Are” especially bears a close resemblance to “Young Blood” by Miller. They both have the similar ideas of teenage rebellion and stepping out of the social norm as a young person.

The lyrics, “There’s never been a mold that you could fit us in, doing what we’re born to do is not a sin” from “We Are”, closely resemble those from “Wild Things” by Cara: “But you and I, we’re pioneers, we make our own rules.” Daya’s similar ideas of a young generation breaking out and doing there own thing is are well-done but far from unique.

Even though some of her ideas seem repetitive and cliche at times, Daya does a good job of putting out an upbeat album that most teens who are coming of age can relate to.