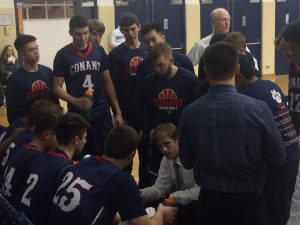 Coach Maley talks to his team during a timeout against Saint Viator.

Jim Maley’s head coaching tenure at Conant tipped off Thanksgiving Week as the boys’ basketball team went 2-2 during the Majkowski Classic at Saint Viator High School. Wins came against Highland Park and Evanston Township, with losses coming against Libertyville and Saint Viator. Maley and his team look at this tournament as one with many benefits.

“I think what is good about this tournament is it tells you a lot of where you are at,” Maley said. Maley says he is happy with the team’s progress adjusting to his system so far. He credits this to captains Ryan Davis, ‘18, and Ben Schols, ‘18, for being extremely coachable, which helps the team overall.

The first win of the Maley era came on Nov. 21, with Davis and Schols doing most of the scoring in a 55-37 victory over the Giants. Davis scored 38 points, along with 21 rebounds, while Schols had 12 points. Maley said, “I have to admit I was a little nervous heading into tonight, but our guys did a good job in playing against a tough Highland Park team.” Davis credits his career high in points to losing weight over the off-season and becoming more mobile.

The Cougars got off to a strong start in this game, which they led after the first three quarters. They almost won in regulation, but Libertyville’s Josh Steinhaus, ‘19, hit a game-tying three with about 10 seconds left, sending the game into overtime with the score tied at 51. In overtime, Libertyville’s Division I prospect Drew Peterson, ‘18, scored all eight of their points, with six coming from the free throw line. Davis missed a half-court shot at the buzzer at the end of the game, leaving the final score 59-56.

Davis, who finished with 24 points, said, “I think this can be a really big turning point for us. In a new season, we’ve got a lot to learn, and this game helped us learn to buy into the coach’s system as a team.”

The Cougars got off to a rough start in this game, with five of their first six possessions resulting in turnovers. With under four minutes to go in the first quarter, Maley took a timeout, telling his players to settle down and force the Wildkits into taking jump shots. “Looking at the film, we realized they weren’t that great of a jump shooting team, and we knew we had to limit their opportunities inside,” Davis said. The Cougars were able to finish the first quarter strong, leading 14-12 at its end. They overcame adversity in the third quarter when Davis was pulled out for three fouls. Schols hit a buzzer beater at the end of the quarter, bringing the score to 41-39 Cougars. The Cougars were able to hold their advantage over the Wildkits, with score of 61-54.

“I was 100 percent happy,” Maley said, referring to the Cougars being able to hold on in the fourth quarter. “We had one little screw up where I thought we took a bad shot, but other than that, we were patient, and we were only playing for layups, and we got a couple of layups, which was nice.”

With their win on Friday night, the Cougars came into this game playing for the tournament championship. The Cougars got off to a good start, but with three minutes left in the first quarter, Lions coach Quin Hayes called a timeout with the Cougars up by seven. The game changed in favor of the Lions after that, with them finishing the half on a 26-5 run, giving them a 29-15 lead at the half. Part of the reason for the Lion’s great run was that Davis stayed out for most of the second quarter due to foul trouble.

“He’s going to get in foul trouble. Calls go against him since he’s big. When he is out, we can’t lose any momentum we have. We’ve got to be able to maintain where we are at the game or cut into the lead,” Maley said.

Even though the Cougars lost the game 58-52, Maley was much more pleased with the team efforts than with their first lost. “This game we showed some heart; we didn’t back into it. We looked very tired, and we could’ve easily lost this game by 30 points, ” Maley said.

Davis finished the game with 31 points, along with 12 rebounds. The Cougars play their first conference game of the season Friday night at Palatine High School.